Donald, Donald, when will you ever learn? 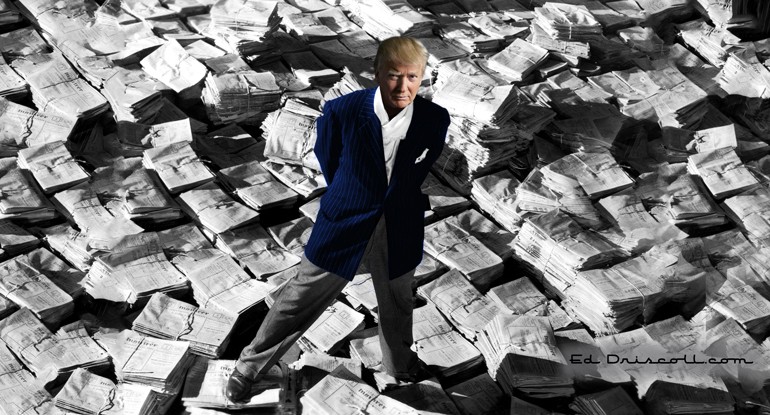 Oh, the vapors, the vapors… Donald Trump, while detailing his veteran donations at a news conference, thoroughly dissed the press and called a reporter “sleazy.”  (Hillary Clinton, it’s worth noting, doesn’t do that.  She can’t because, although running for president, she hasn’t had a news conference in 2016.)

So she doesn’t LIKE news conferences. You have a problem with that?

Source: Trump States the Obvious about the Press | PJ Media

From Chapter 2, “The Lilly Factor”

On July 17, a few weeks after Sen. Harmon did what he could to reassure the Business and Civic Council, he faced citizens in a town hall gathering of his own scheduling, accompanied by one of Oak Park’s two state representatives, Camille Lilly.  . . .  .

Rep. Lilly deserves introduction. Appointed in 2010 to replace the incumbent, who had been appointed alderman to replace one who’d gone to prison on a corruption conviction, she represented north and most of central Oak Park, plus a city neighborhood just north of the village and parts of three other suburbs. Her base was the adjoining Austin neighborhood of the city to the east, a high-crime, mostly black community where she was a hospital executive and chamber of commerce director.

She was picked by five committeemen in a speedy closed session at the Carleton Hotel after a two-hour open session in which seven candidates were interviewed. One of the committeemen called for a unanimous vote, and Lilly had it. Harmon cast his own vote plus another for the River Forest committeeman, whose proxy he held — but who had directed otherwise. This did not stop Harmon, who used “latitude” he said he had if a committeeman calls for a unanimous vote, casting this man’s vote also for Lilly.

Harmon was taken by surprise, he said. His suggestion of a five-minute break before the vote had been ignored, there had been not even a token “pow-wow” by the committee.

“The deal was done before the process was rolled out,” said one of the six defeated candidates. Lilly had been “the inside candidate,” Wednesday Journal publisher Dan Haley had written days earlier — for a position that had to be filled “because there [were] important instructions from [Speaker] Mike Madigan to be carried out and he [was] short a minion.”

Harmon, who had chaired the proceedings, congratulated himself and the party for the unusual open-interview session. He said he thought “folks” were “just weary of politicians and of government,” which was “horribly unfortunate,” adding, “We’re trying things we’ve done in Springfield to try and restore trust in government and trust in politics, and it’s a long road.”

It was the anti-politician comment from a politician — meaningless except when accompanied by tearful resignation and subsequent entrance into a monastery. As one effete plutocrat said to the other at poolside in a long-ago New Yorker cartoon, as the two of them watched a robed and bearded man walking towards them on the water’s surface, “It’s a long time since that’s been done well.”

Illinois Blues is available also in epub and Kindle formats.

Having skipped over dozens of what seemed overblown stories in several newspapers about Ali, I got stopped with this one and am glad I was.

The brash young fighter ran from a punch, they said, and he was hanging out with Malcolm X and the Muslims.

It’s all about lead-up to the Sonny Liston fight. Read it.

Source: When Ali was still Clay, the old white sportswriters didn’t know what to think – The Washington Post

The Islamic State, that is, per this AP story out of Baghdad:

BAGHDAD (AP) — In March, a senior commander with the Islamic State group was driving through northern Syria on orders to lead militants in the fighting there when a drone blasted his vehicle to oblivion.

The killing of Abu Hayjaa al-Tunsi, a Tunisian jihadi, sparked a panicked hunt within the group’s ranks for spies who could have tipped off the U.S-led coalition about his closely guarded movements. By the time it was over, the group would kill 38 of its own members on suspicion of acting as informants.

Not even drumhead courts?