Even civil Civil Wars have casualties. Let us therefore be punctiliously civil.

Taking it to NC Reporter, a.k.a Fishwrap or National Schismatic Reporter.

What did the expert say about their Helsinki press conference?

“If the [UK prime minister] May/Trump summit looked chilly, this Trump/Putin meeting looked buried under a thick layer of perma-frost.

“Both men arrived performing the kind of alpha posturing you normally see in a boxing ring, swaggering with puffed chests and in Trump’s case a mouth clamp plus what was bordering on a scowl to camera as both pulled at their jackets in what is commonly a ‘prepare to fight’ ritual.

“In the room for the photo-call though they looked more like a sullen, divorcing couple at crisis counseling.

“Putin was especially sphinx-like, returning little of the sparse eye contact he received from Trump and maintaining a poker face even after Trump’s ‘soccer’ flattery was being translated for him.

“Trump sat in his usual ‘Trump Slump’ pose with his legs splayed and his fingers in ‘downward steeple’ position to register macho dominance but this time his fingertips tapped together throughout which is a sign of impatience.

“Putin adopted a more elegant power pose, sitting upright with one elbow on the arm of the chair 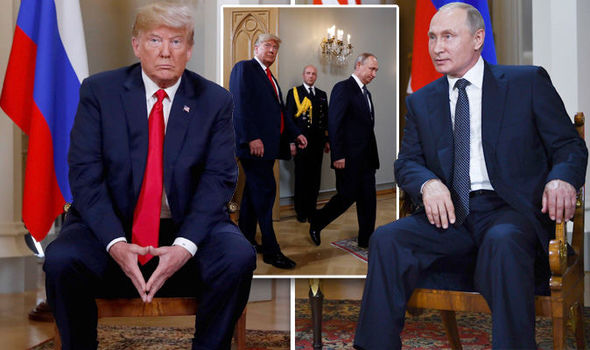 but as Trump spoke Putin’s other hands clasped the lower strut of the chair arm as though irritation could have been making him keen to go.

Not happy campers, the lady is saying.

I do not know but am not panicking. For one thing, he has not got rich by being a patsy. I mean really rich.

Am staying tuned, as always.

Later, alligator. (When music was music and dancing was dancing.)

What’s going on at this Jesuit-run institution?

Heading for the bigs, Christian faith and all.