Or take it free off hands of anti-killing-of-rooster organization in Chi-Town. 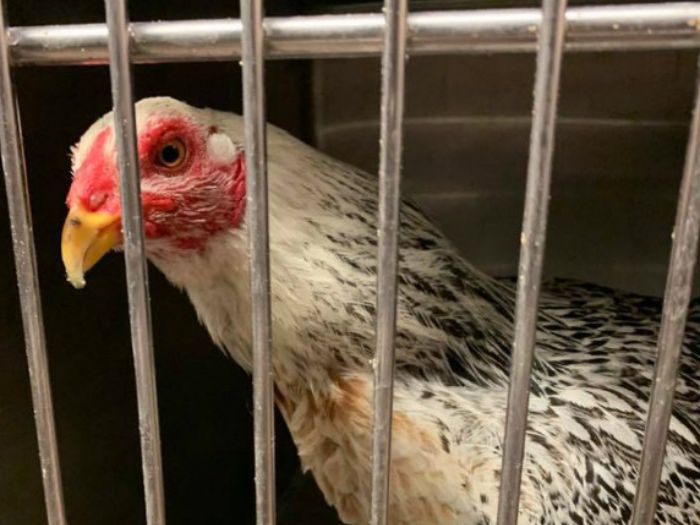 Wanna buy? Because Joe Penner said it to widespread acclaim and a career in vaudeville etc. as a comedian in the long, long ago.

Remember: You read it here.

Threw the book at him and his voters:

[Pope] Francis has frequently been vocal in his support of Mexico’s efforts to help migrants and critical of the United States for blocking migrants at the border. During a visit to the U.S.-Mexico border in 2016, he criticized then-presidential candidate Donald Trump, suggesting that anyone who wanted to build a wall along the border was “not a Christian.”

Not quite a chicken-and-egg thing, or should not be, in view of the primacy of the universal church, which is not a collection of locals but that from which the locals have arisen.

Because it is so topical to the debates going on at the moment in the Catholic Church, we have been considering the Truth that the Universal Catholic Church is ontologically prior (see earlier posts for that weirdo expression) to the local Church; and understanding how wrong the Kasperites are in putting the local Church first…

That would be the German cardinal, Walter Kasper, a leader in the movement within the church for loosening bonds with Rome and going one’s own way as regards what counts and what doesn’t.

It’s a German thing but also, historically, a French and Belgian and Dutch thing — oh those Northern Europeans, to whom we owe so much and yet better watch out for, at least the Kasperites among them.

Egad, the more they complain, the more they exemplify Biden’s point, namely not to demonize your opponents, nor agree with them. Biden’s critics show they are unable to follow this path, much less respect it.

[ad_1] WASHINGTON (Reuters) – Former Vice President Joe Biden came under sharp criticism from some of his Democratic presidential rivals on Wednesday for remarks he made this week about his time working civilly with segregationists serving in the Senate in the 1970s. FILE PHOTO: New York City Mayor and Democratic Presidential candidate Bill de Blasio […]

He couldn’t get away with passing praise for Mike Pence either, and they made him retract that. Emotion matters, but for them it’s the ruling element.

Not long ago, we had a Swedish schoolgirl explaining to us, in very stylish English, about Climate Change. Stylish … but one word grabbed my attention. She said the dangers were “existential”. That word has been around quite a time now; at first, it frightened me. When a new term becomes all the rage, and…

I’ve got it sussed. It is just another example of the modern dodge of choosing a fancy, upmarket-sounding, word to say something that was previously said rather more simply and prosaically, so that the speaker sounds either more like an Intellectual or more like a member of Society’s elite. It’s like ‘locate’

What’s this? A prophet in our midst.

And a philosopher to boot.

via Close Down Old Universities And Build Our Own? — William M. Briggs

AsiaNews, Bernardo Cervellera: Msgr. Vincenzo Guo Xijin, auxiliary bishop of Mindong (Fujian), is willing to suffer persecution along with other underground priests, rather than join the Patriotic Association (PA) or force his priests to join. This has been confirmed to AsiaNews … Continue reading → The post Bishop Vincenzo Guo Xijin: ‘Rather Suffer Persecution Than Join…

A bishop to approve of.

Evidence is found that ethnic and religious minorities are being targeted for organ transplants.

It’s something he said and something a revered predecessor said:

The Vatican’s biggest carbon emitter, “Pope” Francis, warns: “Time is running out! …We do not have the luxury of waiting for others to step forward” to save the planet!

Here we must quote the words of “Saint” John XXIII at the Vatican II opening address: “We feel we must disagree with those prophets of gloom, who are always forecasting disaster, as though the end of the world were at hand”!

Dirty trick played here, catching the (alleged, he says) Holy Father in his speech. Go shoot him down, Francis.

Among likenesses to St. Peter Faber SJ, one of the earliest Jesuits, whom Pope Francis claims as his ideal, is to be a “man of dialogue.”

Not with bishops and cardinals who ask first privately then publicly for clarification of his statements and writings about faith and morals, whom he has ignored for months and years.

Holy Father, please. Do you know what you are saying (to Romanian Jesuits on a recent trip) when you claim to be an imitator of this saint?

I’m beginning to think you don’t, as in many other instances.