I confess I???ve been afraid of the Wu-flu. Oh, not the disease itself. Look, I???m at SLIGHTLY more risk than the rest of you, simply because I catch everything that passes within a block of me.

However, the REALLY important thing to remember is that we really don???t have any idea ??? yet ??? how this will play in the US, but we don???t really have that much of a reason to panic either.

. . . the mortality is mostly among Chinese transplants. And before you tell me I???m racist (rolls eyes), no, I???m not. Leaving aside the protein in the lungs this thing might or might not bind to, there are co-morbidity factors for Chinese (and to an extent for Italians. Definitely for Iranians, particularly Iranian males.) One of them is smoking like a chimney.

The other is that China (where the mortality seems to be way higher, honestly) is more polluted than you can imagine.?? Iran might be too. You know dictatorships don???t really much care for the environment, and I remember Portugal in the early sixties, when going out early in the morning during rush hour was like putting your face fully in the exhaust of a car.

I have no clue as to Italy air quality, and I have a full schedule ahead, so I refuse to fall down that rabbit hole.

So. Argues well but not definitively. Of course, no one is at this point.

Diana West sees a US filled with middle-age guys playing air guitar and thinks “No wonder we can’t stop Islamic terrorism.” She sees Moms Who Mosh and wonders “Is there a single adult left anywhere?” But, the grown-ups are all gone. The disease that killed them was incubated in the sixties to a rock-and-roll score, took hold in the seventies with the help of multicultralism and left us with a nation of eternal adolescents who can’t decide between “good” and “bad”, a generation who can’t say “no”.

From the inability to nix a sixteen year-old’s request for Marilyn Manson concert tickets to offering adolescents parentally-funded motel rooms on prom night to rationalizing murderous acts of Islamic suicide bombers with platitudes of cultural equivalence, West sees us on a slippery slope that’s lead to a time when America has forgotten its place in the world. In The Death of the Grown-Up Diana West serves up a provocative critique of our dangerously indecisive world leavened with humor and shot through with insight.

Not a pretty picture.

The city becoming another San Francisco? Just another blue city.

. . . And making at least a few hearts beat a little less abnormally. Specifically, by saying no to one of the grandest schemes out there.

Mayor Lori Lightfoot is committed to ending poverty within a generation but she isn’t convinced universal basic income will do that.

“I am about teaching people how to fish, so they can feed themselves for a lifetime,” Lightfoot said Thursday at the Solution Toward Ending Poverty Summit at the University of Illinois at Chicago.

“I want people to be able to stand on their own forever.”

Plus, she is spotted by the socialists and their friends as dropping the ball. Which in the politics of the day (and election year) is that for which we can be grateful, especially in blue, blue Cook County.

Mayor Lori Lightfoot was accused Wednesday of going through the motions of a war on poverty by leaving key stakeholders out of her poverty summit and ignoring their suggested remedies.

Progressive groups and their City Council allies have pressured Lightfoot from the left to deliver on her campaign promise to raise the real estate transfer tax on high-end home sales and use the $100 million in annual revenue to reduce homelessness and chip away at Chicago’s 120,000-unit shortage of affordable units.

They want the mayor to drop her opposition to lifting the ban on rent control in Illinois and reinstate the employee head tax that business hated and Rahm Emanuel eliminated.

They have criticized her tax-increment-financing reforms as grossly inadequate and pressured her to “municipalize” Commonwealth Edison’s expiring electricity franchise agreement and deliver the community benefits agreement she promised to prevent local residents from being priced out and pushed out by the Obama Presidential Center in Jackson Park.

On Wednesday, that bill of particulars against Lightfoot was aired at a City Hall news conference by a coalition of community groups that included United Working Families, the Chicago Coalition for the Homeless, Democratic Socialists of America, the Brighton Park Neighborhood Council and the Jane Addams Senior Caucus.

They also questioned why they weren’t invited to the day-long poverty summit that the mayor held last week. The mayor’s office said aldermen were invited. So was the Coalition for the Homeless.

Agency ran anonymous-source story, quoting source at length in great detail, identifying him as one of a dozen or so who attended a closed-door meeting, apparently never asking or even wondering about the other eleven, in any case not naming or referring to them.

Reporter ran two stories, bang, bang, in which two of the attendees shot down Anonymous and with him the Agency.

Lesson: Do not go anonymous when the other guy can check it out, even if the other guy and you agree in no major issues and had to wonder how such a good thing could fall in his (their) lap.

Question: Has the Agency learned that?

It’s what they do, right?

A taste of Bernie, locally.

The Osudairo brothers, with lawyer. 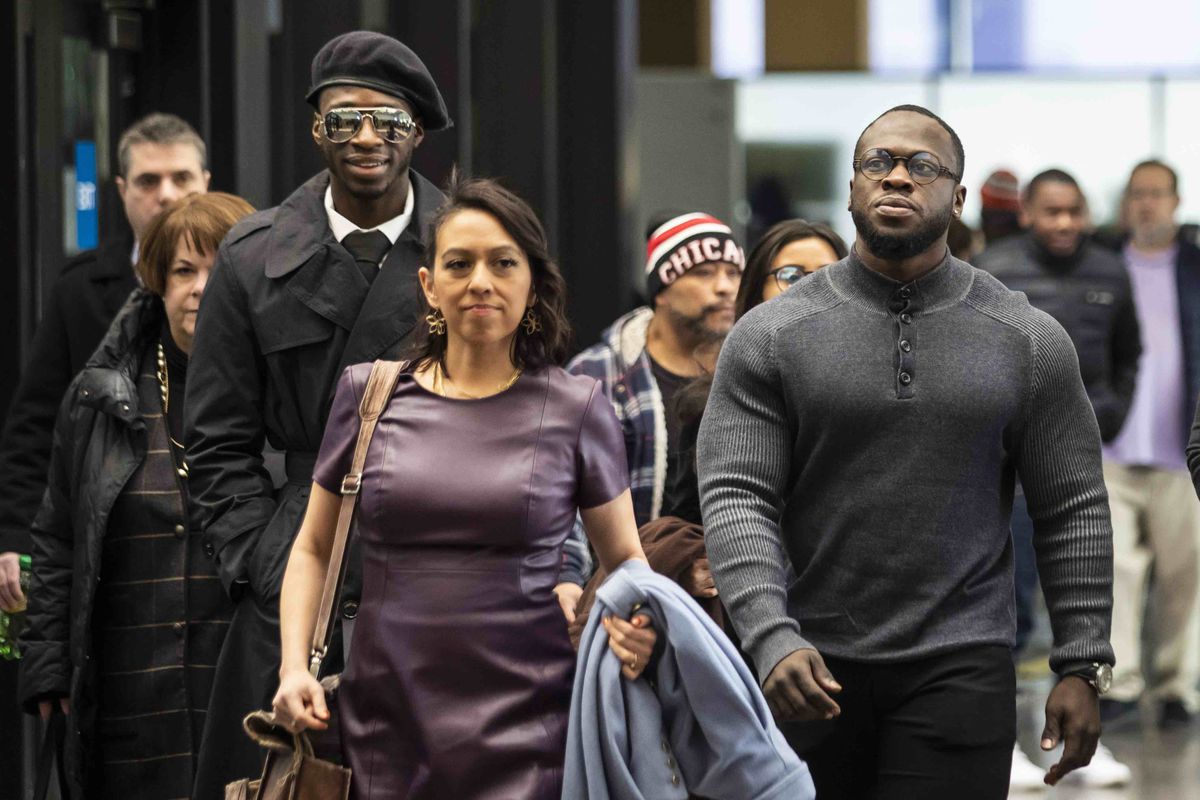 May the best actors win.

Instead, a blow for dignity and recognizing nature of the mass:

Archbishop Villegas says no to clapping during Mass, a memorial of Calvary
“We are a Church called together by God, not a self-organized mutual admiration club,” writes the Archbishop of Lingayen-Dagupan in his letter for Lent.

“The breaking of the Bread is a commemoration of the violent death that the Lord went through. Who claps while others are in pain? It is pain with love; yes, but it still pain.”

I would say so.

And was not happy about it?

“The Holy Father’s disposition was very clear, he was most displeased about the whole subject of Fr. Martin and how their encounter had been used. He was very expressive, both his words and his face –  his anger was very clear, he felt he’d been used,” one bishop told [EWTN-owned] CNA.

Another bishop, the archbishop of Santa Fe NM, did not see it that way.

In the fourth paragraph, the article states that the Pope was most displeased with the subject of “Father Martin and how their encounter had been used.” My recollection is that it was not Father Martin the Pope was talking about, but the way others tried to use that encounter, one way or the other. In my view, the language subtlety [sic], yet incorrectly, leads the reader to believe that Father Martin was the issue while in fact, it was how others used their meeting that was in play. Furthermore, I have no memory at all of the Pope being angry, upset or annoyed. He spoke gently and patiently throughout our meeting.

Bishop Steven Biegler of Cheyenne, Wyoming, said he supports the recollections of Archbishop John Wester of Sante Fe, New Mexico, who went public to counteract two anonymous bishops who insinuated that the pope was unhappy with Martin.

Wester’s response “accurately describes the tone and substance of the short dialogue regarding Fr. James Martin,” he said.

Wester noted several bishops at the meeting brought up the topic of Fr. Martin, including the Jesuit priest’s private meeting with the pope last fall and his recent talk to Catholic university presidents. What displeased the pope, Wester said, was “the way others tried to use” Martin’s papal meeting.

NC Reporter has both these denials of the in effect sourced story about Francis as peeved at Fr. Martin, being careful also to note the anti-Francis parentage and record of CNA and its editor, who wrote the story in question.

Standard enough, and telling. This Bishop Anonymous comes across as gossipy and CNA as unfortunately too eager for his story , though its reference to America Magazine’s post-meeting hurrah made its point about how others interpreted the meeting.

“By choosing to meet him in this place, Pope Francis was making a public statement. In some ways, the meeting was the message,” America Magazine reported of the encounter.

To complete the give-and-take among news outlets, until the next riposte, CNA duly reported on the two NCReporter articles, reminding us of Archbishop Wester’s being what’s called a “Francis bishop” and his having wholeheartedly embraced the James Martin message.

The Santa Fe archbishop, who was appointed to his post in 2015, is one of seven U.S. bishops to have endorsed “Building a Bridge,” Martin’s 2017 book on the Church and homosexuality.

“This courageous work is necessary reading for all who wish to build up the Christian community and to give witness to the Gospel message of inclusion,” Wester wrote of Martin’s book.

Tit for tat, fair is fair on both sides.
As for me, the idea of Francis being angry at Fr. Martin is absurd on its face. But his talking this way to visiting bishops (if he did) would fit with his depiction in Dictator Pope as a true-blue Peronista in his willingness to mix his answers to fit his audience — actually, in Pope Francis’ case even when both sides were on hand for his answers.

The reason why Professor Rego de Planas was puzzled [at then archbishop Bergoglio’s seeming agreement with both sides of hot issues] was that she was Mexican. If she had been Argentinian, she would have found the technique perfectly familiar: it has the note of classic Peronism.

The story is told that Perón, in his days of glory, once proposed to induct a nephew in the mysteries of politics. He first brought the young man with him when he received a deputation of Communists; after hearing their views, he told them, “You’re quite right.”

The next day he received a deputation of fascists and replied again to their arguments, “You’re quite right.” Then he asked his nephew what he thought and the young man said, “You’ve spoken with two groups with diametrically opposite opinions and you told them both that you agreed with them. This is completely unacceptable.”

Perón replied, “You’re quite right too.”