Pope Francis has reportedly refused to meet with Secretary of State Mike Pompeo during his visit to Rome over a dispute between the Vatican and China.

Mr Pompeo plans to visit the Vatican this week to protest the imminent renewal of a two-year-old deal between the Catholic church and China, which the secretary of state has claimed would endanger the church’s moral authority.

He is slated to meet with Vatican Secretary of State Cardinal Pietro Parolin and Archbishop Paul Gallagher, the foreign minister for the Vatican. But Pope Francis, whom Mr Pompeo met with last October, would not be meeting with him.

Well, any good Peronista would do the same. Plus, he’s stubborn and has a churlish attitude when he considers himself provoked.

Ready to deal with Chi Coms, however. Still fuming over gringos north of the border.

Let us now read another chapter in the long, dreary tale of media dissolution in our time, by the shrewd, major-media veteran Taibbi.

The New York Times published a massive expose about Donald Trump’s taxes on Sunday, starting the world on yet another trip up the Trump delirium coaster. The stages of the morality play are burned in our brains. Pundits scream bombshell, rush up a ladder of indignation, jump squealing into an abyss of apocalyptic predictions, dust off and do it again.

How many of these stories have there been? A hundred? Five hundred? A thousand? I tried physically counting and gave up. Our heads are packed with years of half-told stories that were discarded the instant they stopped having commercial or political utility. Some involved Trump, some not, who can remember them all? From sonic weapons in Cuba to spies gone dark to a secret bank server to hacker huddles in Prague to probable cause for an “agent of a foreign power” to Mike Flynn’s mistress to the Manafort-Assange confab to the exfiltrated agent with a home on Realtor.com to Putin’s niece and treason in Helsinki and North Korea and the Oval Office, we remember beginnings and not ends.

More on accounting inspired by NYT article on Trump taxes . . .

One thing that’s really unfair about our tax system is that it is rigged in favor of people who have more resources. Government meddling makes it more costly to conduct business. The more complicated the regulatory burden, the more smaller companies can’t compete. Make the laws complicated enough and the only companies that stay in business are the ones who can afford to pay for twenty guys like me. (my last regular accounting job paid extremely well, and nearly everything I did was jump through government mandated hoops, filling out government mandated paperwork which nobody in the government would probably ever read)

Trump has those resources. I bet he’s got a room full of accountants, and their leader is probably a grizzled old CPA with an eye patch and a raven who sits on his shoulder. The raven also has…

By Larry Correia, via: 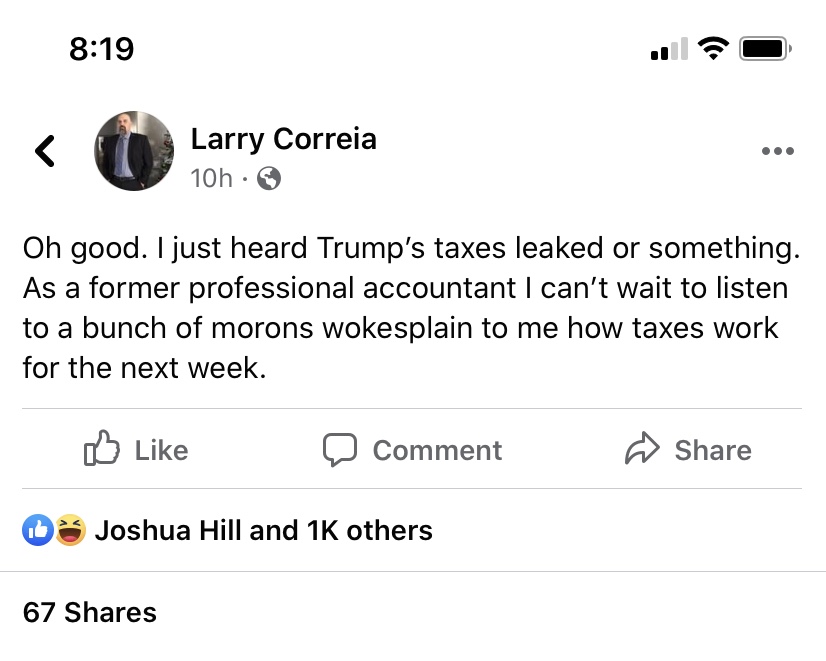 I posted that last night on Facebook, and sure enough, this morning my feed is filled with people who don’t know shit about taxes retweeting the stupid opinions of other morons who also don’t know shit about taxes. This is just as annoying as last week when these same idiots all suddenly became Constitutional Scholars. Or the month before that when they were all experts on use of force laws and police tactics. Or the month before that when they suddenly got their epidemiology degrees from the University of Internet and turned into infectious disease experts.

It’s a problem, he’s got that right.

Of course the comments are all about the “morality” of paying your “fair share”. Which isn’t how any of this works in real life. Just stop it with your vapid hot takes already. You clearly have a child-like grasp of a complex topic, and your words are…

Start with screaming headline — but don’t bother if yr not subscribed.

With the headline screaming, in all caps, “LONG-CONCEALED RECORDS SHOW TRUMP’S CHRONIC LOSSES AND YEARS OF TAX AVOIDANCE” (NY Times).

Then, because you want to hear the other side of the story, go here:

A lawyer for the Trump Organization, Alan Garten . . . denied to the New York Times that the president paid such a small amount of taxes – saying in a statement obtained by Fox News that Trump “has paid tens of millions of dollars in personal taxes to the federal government, including paying millions in personal taxes since announcing his candidacy in 2015.”

“The New York Times’ story is riddled with gross inaccuracies. Over the past decade the President has paid tens of millions of dollars in personal taxes to the federal government,” Garten said. “While we tried to…

“Not sure we need to bring George Soros into this,” said a Fox regular, interrupting Newt Gingrich.

On September 16, Newt Gingrich was cut off the air on a Fox News show, “Outnumbered,” for merely mentioning the role that George Soros is playing in fomenting the anti-cop agenda of the left. Here is what he said.

“The number one problem in almost all these cities [where riots
have taken place] is George Soros-elected left-wing anti-police pro-criminal district attorneys who refuse to keep people locked up.”

Gingrich was interrupted by one of the show’s regulars, Melissa Francis, who said, “I’m not sure we need to bring George Soros into this.” The former Speaker of the House replied, “He paid for it. Why can’t we discuss the fact that millions of dollars….” Gingrich was then cut off again, this time by Marie Harf who took Francis’ side.

Newt Gingrich, you are wanted somewhere else. Now.

Is it too late in Joe’s campaign for a really good theme song?

Next year, next year
Somethin’s bound to happen
This year, this year
I’ll just keep on nappin’

In case you never heard it, Listen.

Had occasion recently to refer to this “fact-checker,” which turns up a lot, especially since Factbook, I mean Facebook, pays it to clean up errors. That’s a pity, actually.

Politifact bills itself as an independent fact checker, and they’ve scored all kinds of accolades for their efforts. Not only did they win a Pulitzer Prize for their work, they have a “fact checking partnership” with Facebook to combat “fake news.” The supposedly independent Politifact is a project of the Tampa Bay Times, which endorsed Hillary Clinton’s 2016 Presidential campaign.

Of course they did. She cleaned up on endorsements. Just couldn’t swing the electoral college.

Anyhow, this piece dissects and analyzes some of the Politifact

CHICAGO — Twelve people have been shot, two fatally in another weekend of violence across Chicago, police said Saturday.

Four people were shot early Saturday in the South Side Chicago Lawn neighborhood. They were standing next to a vehicle on the street when an unknown male in a passing dark-colored sedan shot at them, Chicago police said.

“We have seen the enemy, and the enemy” is anyone standing there when I want to shoot.