America has been on a virtual martial law shutdown for months now with no end in sight, based on unreliable if not inaccurate data about the lethality of Covid-19.

This is a never-ending argument, but the number of people who died from Covid-19 now is as imprecise as it was months ago when this debate started. At the heart of the debate is whether the patient died with Covid-19 or from Covid-19.

Not the same thing.

The crucial difference was highlighted months ago when Dr. Ngozi Ezike, an internist and pediatrician serving as the director of the Illinois Department of Public Health, tried to clarify the distinction between dying with or from Covid-19. At a press conference with Illinois Gov. J. B Pritzker, she responded to a question (see video below):

I just want to be clear in terms of the definition of people dying of COVID. The definition is very simplistic. It means, at the time of death it was a COVID-positive diagnosis. That means that if you were in hospice and had already been given a few weeks to live and then you were also were found to have COVID, that would be counted as a COVID death. Technically, even if you died of clear alternate cause but you still had COVID at the time it is still listed as a COVID death. Everyone who’s listed as a COVID death doesn’t mean that that was the cause of the death but they had COVID at the time of their death. I hope that’s helpful.

As if people were dying of a cold when they had one when they died.

You wouldn’t believe this about Joe Biden:

I n a classic episode of “Seinfeld,” Jerry is accused by his new girlfriend, a police officer, of being a fan of the tacky 1990s soap opera Melrose Place. When Jerry lies and denies it, she suggests putting him on a polygraph to find the truth. In an effort to beat the machine, Jerry seeks the advice of his masterfully mendacious friend, George Constanza, who tells him that his talents can’t be taught — “It’s like saying to Pavarotti, ‘Teach me to sing like you.’” Still, he leaves Jerry with a vital nugget of advice: “. . . Just remember, it’s not a lie if you believe it.”

I think of this bit whenever Democratic presidential candidate Joe Biden starts in with one of his folksy tales about growing up in hardscrabble Pennsylvania and listening to his dad’s extraordinarily forward-thinking adages. We’re probably only a few speeches away from Biden recalling how his dad used to sit on the edge of this bed and tell him, “Champ, always remember, transgendered folk are just like the rest of us.”

He’s ever a man with a yarn.

The politics and journalism are so tribal now that we rarely peek outside our own bubbles.

Blogging now at the Wednesday Journal, I find my self shocking some readers. It’s as if they have never heard things that I take for granted. One of them announced, as if finding a tarantula under the bed, he’s a Trump supporter.

In this account by Newt Gingrich of how Soros buys soft-on-enforcement DA’s is this about an infamous Chicago couple:

Former Hugo Chavez advisor and current San Francisco District Attorney Chesa Boudin was also funded by Soros and his groups. Boudin has called prison “an act of violence” and has refused to prosecute a slew of illegal acts, from public urination to the public solicitation of sex, which he deems to be “quality of life crimes.”

By the way, Boudin is the foster child of Bill Ayers and Bernardine Dohrn, of terrorist group Weather Underground fame. His birth parents were convicted and imprisoned for their involvement in an armed robbery-turned-homicide.

At the risk of exciting some hugely excitable readers of my Wednesday Journal blog, here’s the latest from Europe on locking down as a solution to the Covid problem. 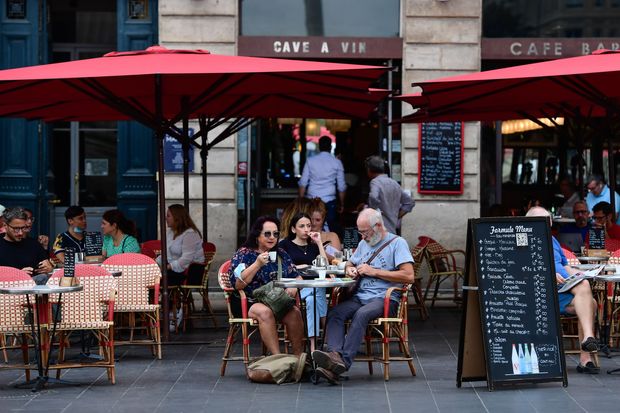 [What fools these mortals be:] Locals sit at a cafe [as if there were no such thing as a
mask] in Bordeaux South-Western France, September 15, 2020. [Comments are bracketed,
emphases are mind]

America’s Democrats often say they want to emulate Europe, and given their fondness for coronavirus lockdowns we can only hope this time they mean it. Parts of Europe, like parts of the U.S., are experiencing surges in new Covid-19 cases. Unlike many in the U.S., European leaders have learned from their earlier experiences with the virus.

The uptick in cases, as measured by positive tests, is noticeable across the Continent—with one exception we’ll come to in a moment. The renewed outbreak is worst in Spain and France, whose seven-day rolling average of new cases per million residents are about 215 and 130, respectively, from lows of about eight during the June lull. The rise elsewhere is less severe but still pronounced. Germany is up to 20 or so cases per million residents, from four earlier in the summer.

They got a problem.

These surges aren’t discriminating on the basis of previous government policies. Italy, Spain and the U.K. were serious hot spots in the pandemic’s first wave in the spring and all imposed strict lockdowns. All three are suffering new waves of the disease anyway. [!]

So is Germany, which avoided the worst ravages of the first wave. At the time, Berlin’s aggressive test-and-trace program coupled with a moderate lockdown were hailed as a public-health role model. Now it’s fairer to say the jury is out on whether Germany permanently suppressed the disease or merely delayed its inevitable spread.

European officials are noticing all of this. They also are noticing that although the new wave has brought more cases, so far the death rate has not been as high as in the spring, and hospitals are weathering the storm well. That’s why their enthusiasm for draconian national lockdowns is waning as the pandemic grinds on. Instead Europe is adopting narrow, local lockdowns and milder control measures.

One theme is that politicians increasingly are alert to the health and economic dangers of mass lockdowns, including mass unemployment, missed education and psychological ills. Another theme is that European leaders are now more inclined to focus on individual responsibility than government action. “There is only so much a government can do,” Herman Goossens, coordinator of a European Union pandemic advisory panel, told the Journal this week. He suggests emphasizing steps individuals can take to control the virus’s spread, such as social distancing and mask wearing.

If that sounds familiar, it’s because that has been Sweden’s approach throughout the pandemic—and Sweden is the conspicuous exception to Europe’s new coronavirus wave. The country eschewed a mandatory lockdown and instead urged prudent individual measures such as working from home when possible and maintaining social distancing.

While it suffered a higher death toll earlier in the crisis—concentrated, as elsewhere, in nursing homes—a second wave has yet to materialize there. If this trend continues, it will provide an important point in the debate over what, if anything, the spring’s lockdowns elsewhere accomplished.

The most notable feature of Europe’s virus response is that policy makers’ judgments are evolving as leaders learn more about the virus and their countries’ ability to manage it. Americans might well ask when their politicians and media will become similarly adaptable in the face of an evolving pandemic.

Once the election is over, if Democrats win, they will see the light. If they don’t, who knows?