ROME—An Italian cardinal whose former office has been embroiled in a financial scandal resigned suddenly Thursday from his Vatican post and renounced his rights as a cardinal, a surprise escalation of an affair that has overshadowed that Holy See for the last year. The extraordinary move was announced without explanation in a terse evening communique from the Holy See press office.

Cardinal Giovanni Angelo Becciu had been head of the office that oversees the canonization of saints. At age 72, he would still have been eligible for the next eight years to vote in a conclave to elect a future pope. Some Vatican watchers even spoke of him as a serious candidate for the papacy.

But for the last year, he has been shadowed by association with scandal that has touched several of his former subordinates.

He’s also been stripped of his duties (and privileges) as a cardinal. Quite unusual.

Aging gracefully can be a wonderful thing. But when you’re running for president?

Tired Joe Biden has already been put out to pasture by his own campaign and he isn’t even president yet. If that weren’t enough, Democratic veep nominee Kamala Harris is dodging the press like I used to drop third-period French.

We’re on the 24th day of September, and the Biden campaign has “called a lid” on Punxsutawney Joe making any “further” appearances today for the ninth time this month.

The word went out before ten AM.

Biden’s last lid was called on Tuesday morning, just 48 hours prior to the current lid.

“Call a lid” is an old campaign expression meaning the candidate is done for the day.

However, I’ve heard it so infrequently over the years that I had to look it up when Biden’s less-than-lazy campaign schedule became undeniable even to the Complicit Media. 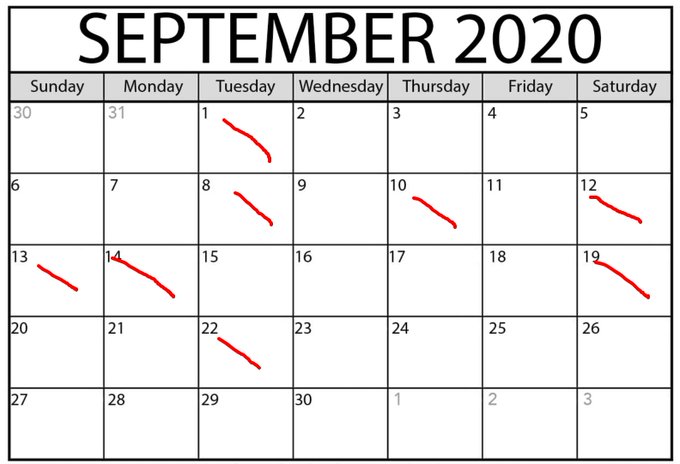 It’s hard to watch this and not conclude that Jerry Nadler likely soiled himself and was trying to disappear—a tough thing to accomplish when you’re right in the center of the stage.

It’s not out of the realm of possibility, especially since Democrats are so full of it . . . .

Achingly aging? Lot of that going around.

Disturbing admission by a council member:

These people are not happy with the jury’s decision.

Well what about people like me who are not happy with their election to public office?

Oh Chuck, they hardly knew him, rather will hardly admit it, maybe.

Some Democrats have finally begun to back away from attacking the process of filling an open Supreme Court seat, but not Chuck Schumer. He has spent most of his time the last few days attacking Mitch McConnell for hypocrisy (fair enough) and for destroying the norms of the Senate regarding its role in the federal judiciary — which is utterly absurd.

McConnell set the record straight on norm-busting in the upper chamber, and Schumer’s long history of it, in a floor speech this morning. Schumer may want to pretend this started in 2016, but McConnell notes exactly when and how this generational food fight over judicial confirmations started, and who started it:

It was Senate Democrats who began our modern challenges with their treatment of Robert Bork in 1987. But the acrimony really got going in the early 2000s, when a group of Senate Democrats took the almost-never-used tactic of filibustering nominations and turned it into a constant routine for the first time ever.

“Who was a main driving force behind those tactics? Let’s consult some New York newspapers from the year 2003. Quote: ‘Schumer decided [to] put ideology on the front burner in the confirmation process… ‘I am the leader (of the filibuster movement), and you know, I’m proud of it,’ said the senator from Brooklyn.’

The Judiciary Committee is the critical battleground in the Supreme Court confirmation process. At stake, her own Democratic colleagues worry, is more than just whether the party can thwart Senate Majority Leader Mitch McConnell (R-Ky.) in his rush to fill the seat. Some Democrats privately fear that Feinstein could mishandle the situation and hurt their chances of winning back the majority.

Feinstein sometimes gets confused by reporters’ questions, or [offers] different answers to the same question depending on where or when she’s asked. Her appearance is frail. And Feinstein’s genteel demeanor, which seems like it belongs to a bygone Senate era, can lead to trouble with an increasingly hard-line Democratic base uninterested in collegiality or bipartisan platitudes.

Violence seized the demonstrations in Taylor’s hometown of Louisville as gunfire rang out last night and wounded two police officers.

There goes Violence again, him and Gunfire. Those two guys have to be rounded up.

The journalistic paragon of my youth was David Broder, who covered politics for the Star and later moved to the Washington Post. He was everything that a reporter in the old model ought to be: dispassionate, nonpartisan, encyclopedic in his knowledge of his subject. Broder had not a trace of the disabling egotism, ruthless ambition or partisan zealotry that afflict media stars today.

As Instapundit would say, read the whole thing — if you’re subscribed, anyhow . . .

Later: Where you will find this:

For now, in the annus insanus of 2020, we are afflicted by a pandemic of media phoniness. Plastering the facts with attitude—tilting the story to the party line, moralizing it, sentimentalizing it, propagandizing it—is the way of noisy, distracted cable news and, increasingly, of all media. Not a sparrow falls without the New York Times, in its news columns, telling the reader that the bird was shot by a “white supremacist.” News is laid before the citizen’s mind so packaged and tarted up with a narrative line that the simple facts are often impossible to discern.