Has you covered, all you people wondering what the heck is going on or strenuously objecting.

Examining the empirical basis for mandatory lockdown policies in both the physical and social sciences. We are concerned about the impact of COVID-19 lockdown / quarantines on our freedoms, human rights, physical and mental health, and economy. We are skeptical of an ongoing lockdown as an effective way to manage the coronavirus pandemic. This is a non-partisan, non-racist, multidisciplinary, global sub. Propagating conspiracy theories is strictly against this sub’s rules.

Or one night stand by upstart?

Before Nov. 3, neither OAN nor Newsmax could come anywhere close to matching, or surpassing, the ratings from America’s reigning king of cable: Fox News, the conservative-leaning news and opinion network that helped cultivate the base of GOP voters which Trump rallied to victory in 2016, has finally lost its crown.

According to media reports, Newsmax beat Fox News among the coveted 25- to 54-year-old demographic for the first time ever on Monday evening. The ratings win comes amid a breakthrough in the Trump Administration’s push to challenge the election results in the court of public opinion to try and “delegitimize” Biden’s presidency (just like how many on the left refused to accept Donald Trump as their president 4 yeas ago).

The battle has at times impacted Fox’s shares. 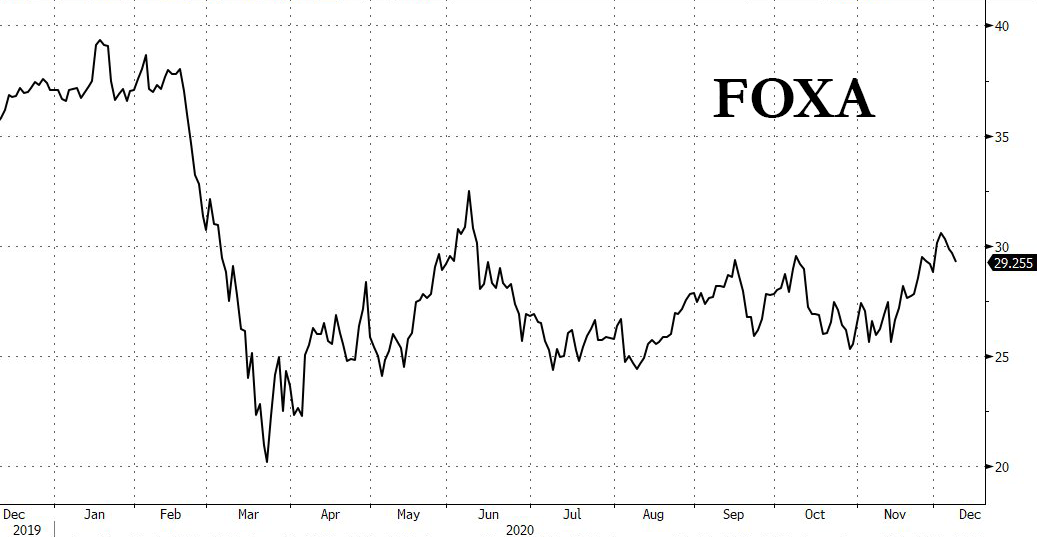 CNN’s Brian Stelter, who clearly likes to think of himself on the de facto “reporter of record” when it comes to covering the American media industry (the eptiome of naval gazing, as far as we can tell), broke the news late Tuesday.

“Before the election, Newsmax was not regarded as a formidable competitor to Fox; it was mostly dismissed as one of a handful of wannabe challengers,” CNN’s Brian Stelter reports. “But President Trump’s loss on Nov. 3 changed the cable TV calculus. Viewers who were frustrated when Fox admitted the truth of Trump’s loss sought other options,” and “Newsmax — and Kelly in particular — offered a safe space in which Biden was not called president-elect and Trump was not yet defeated.”

Of course, many on the left are blaming Fox’s “Fall From Grace” on the fact that it “stood up to Trump” by calling the vote for Biden, even as supreme court challenges and other questions remian unresolved. Trump’s most loyal followers are likewise repudiating Fox, and embracing Sinclair-owned Newsmax and OAN.

While this is only the first time any Newsmax programming blocks has topped Fox, we imagine it won’t be the last, particularly as Newsmax copies more and more of what worked at Fox, while filtering out everything that didn’t.

All from Tyler Durden at Zero Hedge, where the elite meet to catch up on things.