. . . fresh from the wonderland world of the Trump-deranged circle of Democrats at large.

And yet, on Monday evening, several members of the House of Representatives delivered to the Senate an article of impeachment that reads as if Trump were still president. It starts off like this:

The next few paragraphs detail conduct by Trump that occurred in early January, when he was indeed president. (The article of impeachment was passed on January 13.) And then, another step back in time when the article says, “Wherefore, Donald John Trump, by such conduct, has demonstrated that he will remain a threat to national security, democracy, and the Constitution if allowed to remain in office…”

If allowed to remain in office? Donald John Trump is no longer in office. You can Google it.

I went ahead and did so, and he’s right.

At the very end of the article, the House says, “Donald John Trump thus warrants impeachment and trial, removal from office, and disqualification to hold and enjoy any office of honor, trust, or profit under the United States.”

Removal from office? There they go again. [He’s
still president!!] It is only in the final clause — the assertion that Trump should not be allowed to hold any federal office in the future — that Democrats get to the real purpose of the impeachment trial.

The Portland-based journalist – a regular presence documenting violent Antifa activity in the Pacific Northwest (and having been assaulted for his coverage) – has fled to the United Kingdom.

“My hometown of Portland, Oregon is the epicenter of American Antifa,” Ngo told Sky News Australia in a Saturday interview. Ngo noted tthat US politicians who rightly condemned the January 6 riots at the Capitol were “at best silent last year when my city was literally under siege.”

“At worse they actually promoted some of the crowd funded campaigns,” he added.

Nancy And Paul Pelosi Bought More Than $1 Million In Tesla, Disney And Apple Calls In December 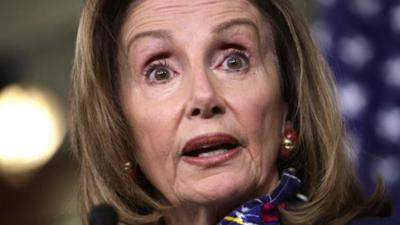 …the Speaker now clearly has a vested interest in the success of names like Tesla, whose trajectories as public companies can be altered drastically by government decisions.

Can’t keep a good man down.

President Trump established the office in Palm Beach County, Florida to “carry on the agenda of the Trump Administration through advocacy, organizing, and public activism.” The office gives the ex-president a formal vehicle to coordinate future public appearances, statements and official activities.

“President Trump will always and forever be a champion for the American People,” the press release said.

Obama had a similar ‘office of the former president’ in DC during the Trump administration.