“Denis Crouan, the French founder and president (since 1988 or so) of the organization Pro liturgia, which promotes “the Mass as Vatican II truly intended it”, with Latin, chant, ad orientem, etc.,” sounds off:

Asking present-day clergy to respect the liturgy of the Church is a waste of time: with an obstinacy often coupled with a profound lack of culture, those who occupy the places from which they are supposed to teach, go before, and lead the faithful – at all levels in the Church, from the pope to the simple parish priest – seem to want to systematically sabotage divine worship in a way that remains completely incomprehensible.

That Pope Bergoglio is more interested in Luther and Pachamama than in the doctrine and morals of the Church is his choice: a choice that everyone is entitled to consider regrettable and more than…

Thus be it ever:

Let’s face it: Privilege is so enjoyable the beneficiaries are mostly seen as undeserving, spoiled lightweights. By the underprivileged, that is.

Envy has always been around, as has the urge to take away the wealth from those not seen as having earned it.

After the defeat of communism, socialism has become the goal, and a war is being waged against the affluent led by the American mainstream media and academia.

In this, hacks and academics are aided and abetted by Silicon Valley freaks who pose as humanity’s saviors, not among those reaping the benefits of economic inequality.

So here we are. Now what?

By limiting his choice to a Black woman, President Biden has disqualified every non-Black woman and man in America. There are a considerable number of highly qualified Black women, and I would applaud the nomination of any one of them. But that is not the issue. The issue is exclusion.

. . . should then select his nominee from that list. In doing so, he might follow the example of President Herbert Hoover, who asked his Attorney General to prepare a list of nominees to replace the great Justice Oliver Wendell Holmes, Jr.

Historians recount that Hoover showed the list to Republican Senator William Borah. Benjamin Cardozo’s name was at the bottom, along with the three reasons he should not be nominated, despite his great distinction:

“Cardozo [sic] – Jew, Democrat, New York.” Borah glanced at it. . . and told Hoover, “Your list is alright, but you handed it to me upside down . . .” and reportedly told Hoover, “Anyone who raises the question of race is unfit to advise you concerning so important a matter.”

Cardozo was nominated and confirmed.

Irrelevant, the senator said. Except politically, he might have added . . .

From the doggedly persistent onetime NYT reporter Alex Berenson putting it to the WaPo writer who blithely, blithely dismisses as “misinformation” his hard-news reporting on the trouble with vaxxing as publicly reported by three countries, not the U.S.

Here’s what (the Twitter-banned) Berenson said about it:

I could make the long case about original antigenic sin, falling antibodies, the issues around cellular immunity, myocarditis, and all the rest.

But I’m just going to offer these four images because they speak more clearly than anything I could say.

Scotland, Britain, Israel, and Denmark are four of the world’s most highly vaccinated countries. They all have 90 percent adult Covid vaccination rates and 60 percent adult boosters. Yet the vast majority of deaths are occurring in vaccinated people; serious cases are soaring; and…

In Blighty, where things are looking up. 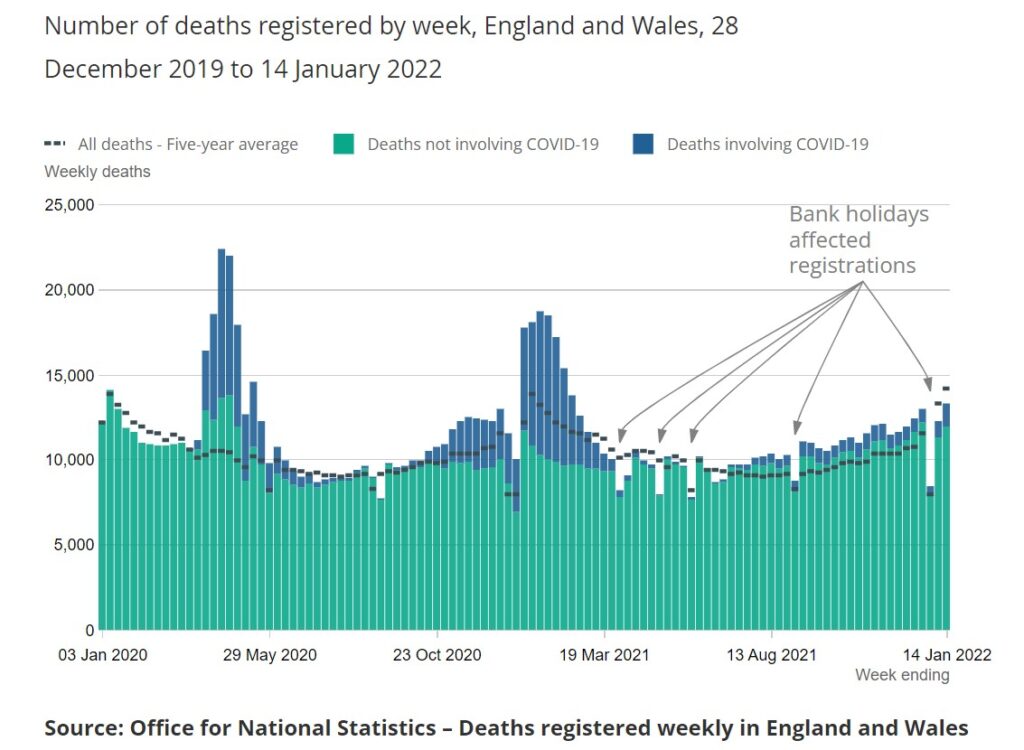 Winter deaths are usually running high at this point in January, but this year is different.

According to the latest figures from the ONS, released today, in the week ending January 14th there were 6.1% fewer deaths than the five-year average in England and Wales (872 fewer deaths).

Note that the five-year average the ONS uses doesn’t include 2020 or 2021, only the historically low-mortality years 2015-19, so this is an extremely low figure indeed.

The recession (of our emergency) cometh?

In this book that tells the story of a world-class swindler.

Robert Kennedy Jr’s book The Real Anthony Fauci is a criminal rap sheet 800 pages long, and places Covid supremo Dr Fauci in the dock where, based on this evidence, he ought to be.

Find out for yourself. It’s a non-fiction thriller, detailed and amazing/horrifying.

Together on Zoom. in “White Accountability Groups,” which . . .

. . . are for people who identify as white and/or have white skin privilege to explore how to recognize whiteness and white privilege, identify and interrupt our internalized dominance, and collectively develop strategies for liberation and change,” the duo wrote on their intake form for those seeking to participate in the . . . groups,

are scheduled to meet over Zoom every other week on Monday beginning Jan. 31 from 4 to 5:15 p.m.

No end date is mentioned. The duo are Dominican University’s ministry coordinator and Title V Project director. Title V is for advancing equity among programs serving mothers’ and children’s health.

Villagers are urged to participate in the Zoom meetings by the village president.

The nation is not in the best of hands.

He went on for nearly two hours. The longer it went, the worse he got.

In accordance with the policy of His Eminence Cardinal Blase Cupich and the implementation of the motu proprio of His Holiness Pope Francis Traditionis Custodes within the Archdiocese of Chicago, there will be changes to the schedule of Masses at St John Cantius Church.

Beginning on January 25, 2022, on the first Sunday of each month, the Holy Sacrifice of the Mass will be celebrated in the Ordinary Form of the Roman Missal, both in Latin and English.

The Archdiocese also prescribes for us liturgical unity of prayer for Holy Mother Church’s major feasts of Christmas, Pentecost and Easter, including the Triduum.

The canons — priests, brothers, seminarians — will work harder than ever “to restore the sacred.”

A shame, because it’s rather good, a cry from the heart, cast as a letter to his vicariate bishop and dutiful in tone. Direct too, opening:

Thank you for consulting the Archbishop [Cardinal Cupich] regarding my request for permission to offer the Holy Sacrifice, “Ad Orientem.” [Facing east, or in same direction as the people, a key feature of the Traditional Latin Mass.] I will comply with his directive that this is forbidden in his Archdiocese.

Even so, the Archbishop does not provide evidence that “Ad Orientem” was abrogated at the Second Vatican Council. As I read Sacrosanctum Concilium [the council’s document on the liturgy] and the Roman Missal the implication is “Ad Orientem” was not abolished or prohibited – on the contrary.

He also makes respectful but direct…