The learned, perspicacious, faithful to the core Fr. Hunwicke has “two very brief pointers” for you:

(1) Sedevacantism [papal chair currently empty] is the other side of the same coin as Ultrapapalism [papal chair is gloriously sat on] (Hyperbergoglioism?) expressed by a number of the undesirables who surround the Holy Father. In each case, there is the same erroneous major premise.

(2) Whichever of the many forms of sedevacantism you are tempted by, subject it to the Pope Honorius Test. He was condemned by an Ecumenical Council and anathematised [condemned] by a successor. But can anyone produce any evidence that the Council, or any subsequent popes who condemned him, or any reputable ecclesiastical writer, has ever argued that Honorius had ceased to be Pope at the moment when he acted heretically?

Both the Council, and the Pope who confirmed the condemnation it decreed, anathematised him well after his death. They did not say that he fell from office during his lifetime.

Whether or not you like Bergoglio, he is, beyond any shadow of doubt, the Pope.

Ah yes. The current occupier of the chair.

Fr. H. is bringing up new readers of his Mutual Enrichment blog as to where he stands on a hot issue among critics of Pope (!) Francis.

Would you think this might give pause to climate panic-mongers? 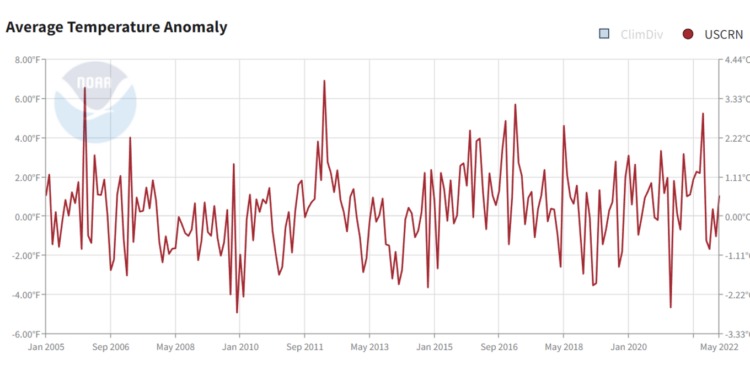 There has been no temperature warming for at least 17 years across the United States, according to results from a rarely referenced dataset that was designed to remove all urban heat distortions.

The dataset, compiled by the Natural Oceanic and Atmospheric Administration (NOAA) in the U.S., shows oscillating temperature changes, but very little evidence to indicate a warming trend.

In fact, the above graph clearly shows the United States to be cooler in May 2022 compared to May 2005.