Mugging of white man in our fair village:

Alton L. Hayes III, of Oak Park, and a 15-year-old Chicagoan both black walked up behind the 19-year-old victim and pinned his arms to his side early Tuesday, police said. 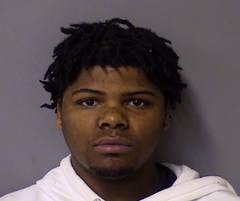 He said, Empty your pockets, white boy,” robbed him, threw him down and punched him out, he and his friend.

He was mad about the Trayvon business and took it out on the white man, he told police. It didn’t pay.

He was still in jail Friday.

Sen. Don Harmon’s recent explanation for the necessity of the state income tax increase . . . was laughable.

The good senator pontificates, What are we asking of taxpayers? A temporary increase of the individual income tax rate of 2 percentage points.

[But] (a)lthough the base tax rate increased from 3 percent to 5 percent, the overall increase to taxpayers is 66 percent! The state’s corporate income tax also had a temporary increase from 7.3 percent to 9.5 percent ­­ a 30 percent increase! The senator forgot to bring this information to his letter.

Hefner also uncovers an unfortunate reality hidden in plain sight from most of us, referring to fellow Oak Parker Harmon as “a career politician.” So are they all, to be sure, with exceptions so rare I can’t think of one right now.

In any case, it’s good to be reminded that almost all elected officials are careerists — and be duly suspicious of them, especially when they call a 2% actual tax increase a mere 2% relative one, without saying that’s what they are doing. Fie, Sen. Harmon!

This may be the guy: 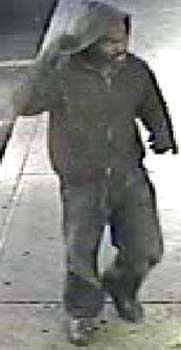 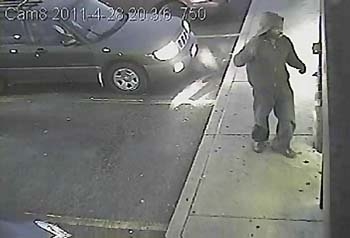 They are of a guy using a just-stolen debit card.

Jim, one thing the police have requested is that ANYONE who thinks something is amiss should call the police. It’s a good policy at any time, but especially when concerns are high about this threat.

Meanwhile, the Guardian Angels are a unique presence. I watched a young white woman yesterday, mid-day, come out of her house on OP Ave. and hail three of them walking by, walk up to them and shake their hands. Three black guys in white T-shirts and red berets. Can’t remember the last time I saw anything like that.

Oak Park is considering its first public-housing project.  CHA, eat your heart out.  It’s a do-over of a Madison Street building rented out by Comcast for many years until Comcast moved to greener pastures in DuPage County — taxes, you know, range of employees to choose from, security, etc., we presume.

That left a big empty building a block west of Oak Park Avenue, 6800–plus West, a low-hanging fruit to be picked by Catholic Charities and others on which to develop something for low-income people.  It’s to be a concentration of such, hence a good old-fashioned public-housing project such as was criticized in a 1996 report:

Although scattered-site public housing has been promoted as an alternative to large projects that concentrate poverty and problems, little systematic information is available about its characteristics and performance. However, Scattered-Site Housing: Characteristics and Consequences, by James Hogan, fills this gap with an important synthesis of survey data, secondary data, and case studies, describing scattered-site as “a demonstrably better housing choice for families than concentrated high-density projects.” [Italics added]

The village plan commission has found no problem with it.  The two dissenters (of eight commissioners) had a problem with parking, a tried-and-true issue that says nothing about social engineering — “the murky tenant profile,” for instance — but a lot about traffic engineering.

It will come before the village board — for not quite half of which there’s an election coming up April 5 — on May 16.  Five of seven trustees have to approve overturning the Plan Commission. (Italics added)  None of the five candidates running for three trustee positions say how they would vote on the matter.

This is wild.  Election time, and they won’t say?  Love us or leave us, they are saying, regardless of this issue.

Rep. Davis last April at Village Hall. Held off until he ran for county board president (he didn’t) and then until he ran for mayor (he’s not doing that), presented now to voters in the Illinois 7th as maybe something to keep in mind when redistricting comes around . . .

Presenting Danny Davis, once gearing up to be future mayor of Chicago but for several weeks now not, as he presented himself last spring, when he was running for Congress and in process of winning 80% of the vote on Chicago’s West Side and several western suburbs.

He is his regular folksy self, tossing off more or less relevant observations in answer to questions, leaving connections sometime to the listener’s imagination. . . . .

Read the rest of it here, at Blithe Spirit for longer items . . . (Scroll down a bit)

“Opponents repeatedly riffed on the project for containing only people who earn less than $26,300, rather than a mix of wage earners,” Wed. Journal says, in coverage of a public hearing at OP village hall about proposed conversion of an office building for low-income housing.

The writer wants to say that many made the same argument, but this is “riff” as “comment,” which is many steps removed from what the musician does with a series of chords. He plays it again and again — which makes “repeatedly” redundant, by the way — to the presumed enjoyment of listeners.

On another point, the article gives a location as the 1100 block of Ridgeland. South or North?

To which I: “Maybe there’s some common-ground possibility here. Where does it not harm (help) us? And how? Could Tom elaborate?”

We might get down to basics with such a discussion.